You are using an unsupported browser. Please update your browser to the latest version on or before July 31, 2020.

Each Imagicard playing card deck includes one card with a digital download code. This code allows you to download to your LeapFrog Epic or LeapPad tablet* the digital game app that accompanies the playing cards. This card should be the top card in the Imagicard deck: 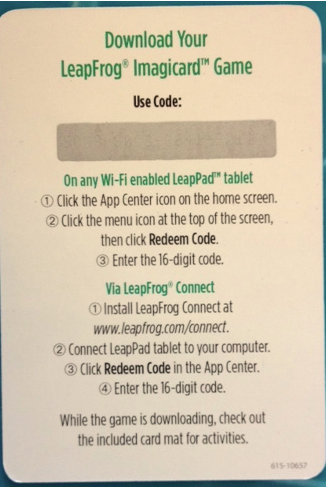 Scratch off the protective silver covering to reveal a 16 digit code redeemable in the LeapFrog App Center.  After redeeming the code in the LeapFrog App Center, you will be instructed to select which of the three Imagicard game decks you own (Letter Factory, Paw Patrol, or Teenage Mutant Ninja Turtles).  Select the app which matches your playing card deck to download the appropriate app.